Several European societies are still suffering from the conflicts rooted in the past and look for the means to overcome the difficult historical legacy. RePAST was a research project that addressed this issue; relying on a multi-method interdisciplinary approach, as it investigated how six member states of the EU and two non-member states (Bosnia-Herzegovina, Cyprus, Germany, Greece, Ireland, Kosovo, Poland, Spain) deal with their troubled pasts today. By analysing the discourses in history, media, politics and arts & culture, the project explored how these conflicting discourses impact European integration and hinder attempts to increase internal cohesion of these societies. Based on an extensive research, the project implemented several actions and proposes strategies for reflecting upon these discourses to strengthen European integration.

Universite libre de Bruxelles (Dr Pieter Lagrou), in cooperation with a RePAST consortium partner Aristotle University of Thessaloniki, Chair of Jewish Studies (Dr Giorgos Antoniou), organized the summer school on troubled past of the Balkans. Several interesting walking tours, workshops and other academic activities took place between 25 June and 5 July 2021, including the lecture on revisionism in Bosnia-Herzegovina by Dr Rok Zupančič (University of Ljubljana). Dr Zupančič presented the most recent research findings of the RePAST research conducted in Bosnia-Herzegovina at the famous historical site of Yedi Kule (Heptapyrgion), now a museum in Thessaloniki, which for decades served as a notorius prison.

07/23/2021: RePAST Dissemination at the University of Belgrade

Dr Rok Zupančič (University of Ljubljana) presented the project RePAST at the University of Belgrade, Faculty of Political Science. In a new podcast series entitled Security Theatre, he was hosted by Prof Filip Ejdus. Apart from the project RePAST in general, Dr Zupančič also presented the psychosocial experiment conducted in Bosnia-Herzegovina, which is discussed in detail in the recently published paper in the journal Southeast European and Black Sea Studies (co-authored by Faris Kočan and Janja Vuga).

On 24 June 2021, Max van der Stoel Institute at the South East European University (North Macedonia) organized the event on the funding opportunities of the European Union, aimed at increasing the awareness of North Macedonian scholars and experts about the possibilities of their participation in future calls of the EU. Dr Rok Zupančič (University of Ljubljana), in cooperation with the project leader Dr Dimitra Milioni, presented the overall objective of the project RePAST and the results from field work in Bosnia-Herzegovina.

RePAST-coloured panel at the CEIISA-ISA conference has just been approved! We appear in the afternoon’s session on the very first day of the conference. From the perspective of academic dissemination, we share a belief that it is good that RePAST appears in various academic fields, and International Studies Association conferences are the conferences, when it comes to international relations and security studies, and also for some political science scholars. Last, but not least, we managed to get on board a person, who is not a member of RePAST (Dr Anna Jagiello-Szostak).

Congratulations & good luck with the writing  of your papers ! 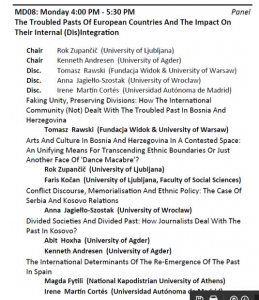 The Panel Proposal for the MSA Conference has been accepted! The Panel is entitled Memory in Times of Political Change and is formed by 4 papers from authors that are members of the H2020 project REPAST “Strengthening European integration through the analysis of conflict discourses. Revisiting the past, anticipating the future”. The papers deal with different ways in which the memory about past conflicts becomes part of the political struggle and focuses on the cases of Bosnia and Herzegovina, Kosovo, Germany and Spain, through varied methodologies covering the analysis of art and cultural events, media, and parties’ initiatives in Parliament. PDF

3/13/2019:  Invitation to the Roundtable Discussion on Kosovo and Bosnia-Herzegovina

This is to invite you to a roundtable discussion on Kosovo and Bosnia-Herzegovina, which will take place on Thursday, 4 April 2019 from 10.30 until 12.00 at the Centre for European Perspective (Grajska cesta 1, 1234 Mengeš) in Ljubljana. The roundtable is organised in the framework of a Horizon2020 academic research project entitled “Revisiting the Past, Anticipating the Future: Strengthening European Integration through the Analysis of Conflict Discourses – RePAST (www.repast.eu).”

Please remember to RSVP for the event at faris.kocan@fdv.uni-lj.si by Friday, 29 March 2019.