Abit Hoxha’s presentation ‘Violence, War, and Gender: Collective Memory and Politics of Remembrance in Kosovo’ at the International Conference on Genocide aimed to provide knowledge on the politics of collective memory and remembrance through the lenses of media productions in the framework of EU integration.

Although, Kosovo has signed the Stabilisation and Accession Agreement with the EU and thus formally established this relation with the EU, the country struggles to deal with the past in the framework of EU integration. In absence of political actions by the state actors, the NGO and media sectors took over actions of collective memory and remembrance politics. This presentation used data from focus groups collected for the RePAST project. 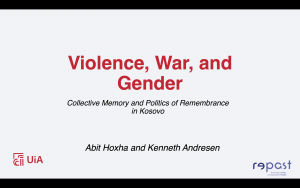 About the Author: Britney Burger