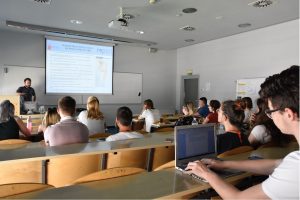 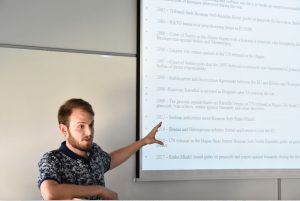 On 5 July, Faris Kočan, researcher of the University of Ljubljana’s RePAST team, participated as an invited speaker in the Summer School at the Faculty of Social Sciences (Ljubljana) called Academia Aestiva Internationalis. Under the title ‘Emerging Global Challenges: Human Rights 70 Years Later’, Faris Kočan talked about Bosnia and Herzegovina (BiH). With a special focus on major milestone events of conflict and post-conflict BiH, he prepared an interactive lecture where 20 participants from Europe and the region familiarized themselves with the history, institutions and power sharing in BiH, and ethnopolitical divide in the country through discrimination in education. The second part of the lecture was devoted to the methodological presentation of the RePAST and showed some examples of potential research focuses for the BA and MA students who would want to innovatively research post-conflict societies. Due to the fact that most of the participants were not from region, but from the countries like Netherlands, Belgium, Sweden, and Switzerland, they were interested in the Yugoslav Wars in general, and discussed potential synergies with other historical conflicts on the European continent.

About the Author: Britney Burger